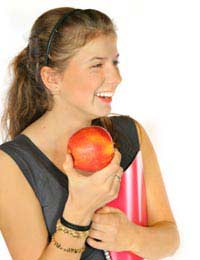 School dinners are in a state of flux right now, with new regulations bringing less sugar and salt, and more fruit and veg to canteen tables across the UK. This transition means that most schools are striving for healthier meals, but not all of them are quite there yet. In the future all British school dinners will conform to certain guidelines, but if you feel that you aren't enjoying the nutritious dinners you deserve, then consider bringing your own!

School dinners in England are getting a makeover. In May, 2006 the government announced that chocolate, crisps, fizzy drinks, high fat meals, high salt meals and low quality meats will be off the menu. Deep fried food will only be offered twice a week at the most, and a minimum of two fruits and vegetables will be on offer at every meal. New nutritional guidelines will take effect from 2008 for primary schools, and 2009 for secondary schools, which means a healthier future is just around the corner.

Scottish school meals have been on the up and up since the Scottish Executive launched Hungry for Success in 2002. This programme cut down on low quality meats, required servings of oily fish and brown bread, and increased the number of fruits and vegetables consumed by children. A free piece of fruit for every child in their first two years of school is offered across Scotland, as is chilled water on demand and bigger portion sizes for older children. The Scottish Executive is now also fighting to ban schools from serving junk food or drinks.

School meals in Wales are following England and Scotland toward more nutritious menus. The Welsh Assembly has committed to banning junk food in Welsh schools and increasing the budget spent on creating healthy meals for every student. An increase in learning and a decrease in waistlines can't be far behind.

Bring Your Own Brain Food

If you are not convinced that your school dinners are worth eating, then don't! Bring your own brain food for satisfying your school day hunger. Remember the British Nutrition Foundation's easy advice for better nutrition and include:School dinners are the source of great controversy in the UK right now, but even if we can't all agree on what constitutes a good school dinner, we can certainly all agree that proper nutrition is important for growing kids and teens. Don't take chances with your health, or your education. Instead, eat a healthy school dinner every day and enjoy the increase in energy, concentration and enthusiasm that will result!