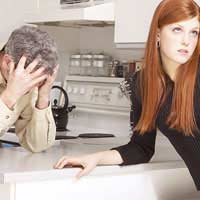 Arguing with your parents is totally natural for teens. From your hairstyle to your friends your marks at school to your television habits, your future plans to your curfew, it might just seem like you argue with your parents about everything. While this is not generally a pleasant state of affairs, it is normal and it will most likely pass. In the meantime, remember to argue fairly, argue respectfully and argue only when needed. It might be hard to stay in control while arguing with parents, but it will certainly keep your relationship stronger than it would be otherwise.

Arguments between teens and parents generally come about when both parties believe that they know what is best for the teen. Parents have been caring for their teens for over a decade, but teens are quickly becoming adults and believe that they are able to take care of themselves. If you are a teen arguing with your parents, remember that your parents love you and only want what is best for you. If you must argue with them, argue fairly by:

No matter how heated things may get during an argument, try to remember that your parents still deserve your attention, respect and love. This may be hard when you’re facing a month full of Friday nights stuck at home or a week’s worth of laundry that you don’t think you should have to do, but in the end you’ll be glad that you always gave your parents the respect they deserve. During arguments, be respectful by:

Argue Only When Needed

There is a thin line between having a discussion and engaging in an argument, but smart teens know that keeping their interactions with their parents at the discussion level practically guarantees that they will be taken more seriously. No one likes to argue, and the parents of teens can be especially weary of it, so keeping things on a serious and even keel will work to everyone’s advantage. Reserve your arguments for issues that you feel passionately about, and even then only descend into an argument if you see no other way to get your point across to your parents.

Arguing with parents is practically a hallmark of the teenaged years, but out of control arguments don’t serve anyone well. Teens who can remain calm, speak rationally and defend their points are the teens who will best preserve their relationships with their parents. Before arguing with your parents, decide what type of teen you want to be and what compromises you are willing to make in order to achieve your goals. You never know, you might just avoid an argument all together.

Caring for a Parent

Coping as a Teenage Parent