Coping with a Crush 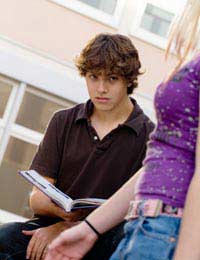 Like their first kiss and their first love, most people can remember any number of details about their first real "crush." The butterflies in their stomachs, the dry mouths, the sweaty palms, the racing hearts - it may all sound gross, but these symptoms are exhilarating when you get to pair up with your crush for a science experiment, sit next to your crush on the bus or (the crème de la crème of crush-dom), manage to eat a whole lunch by your crush's side. Unfortunately, the title "crush" is apt as it is very easy to be crushed if you find out that (s)he does not return your affections. Don't be crushed by a crush! Instead, follow these tips for moving on and moving up to someone who deserves your special attention.

A crush, unlike a relationship, is not a two-way street. Often you'll realize that you feel a strong attraction to someone you barely know, for reasons you barely understand, and that this, in all of its glory, is a crush.

Signs of a Killer Crush

Even if you know better, falling hard for a crush can be unavoidable. Signs of a killer crush include:

Coping with a Crush

Living with a crush isn't easy, in fact it's hard work. Having a crush makes it hard to concentrate, it makes it hard to eat and it especially makes it hard to sleep, even if you are hoping to meet up with your crush somewhere in your dreams. To make sure that the rest of your life doesn't fall apart for the duration of your crush, Living with a crush can be a wonderful, magical, painful, torturous time. Allow yourself to enjoy the frivolity of a crush, but don't let your feelings override your common sense. Don't risk your safety, or your reputation, in order to get your crush's attention, and forget about your true friends and relationships. In other words, don't irrevocably change your life for a crush that will likely disappear as quickly as it began. Ride it out, enjoy it, and let it die its natural death.

Coping with a Jealous Friend

How to Cope With Your Sexual Identity