All About Eating Disorders 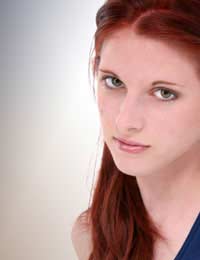 Anorexia is an eating disorder in which the sufferer becomes so afraid of gaining weight that (s)he starts to decrease the amount of food (s)he will eat until (s)he literally starves. Even when they are physically wasting away, anorexics will perceive themselves as heavy and continue eating as little as possible. Without enough nourishment to sustain them, the anorexic's internal organs will begin to fail and if this persists, death can and will occur.

In contrast to anorexics who carefully control the amount of food they eat, bulimics often consume far too much food in one sitting and then get rid of it either by making themselves sick or taking laxatives. This binging and purging becomes a cycle, and bulimics may never lose, or gain, enough weight to make it obvious that they have an eating disorder. Though they do consume enough calories to keep their bodies healthy, the constant purging can damage their digestive tract, mouth, teeth and salivary glands. The yo-yoing of their diet can also mean that bulimics rarely take in enough vitamins and minerals to remain healthy.

Much like bulimics, those suffering from binge eating disorders will consume large amounts of food at one sitting. Unlike bulimics, they do not purge or rid themselves of this food. Instead, those with binge eating disorders often become obese from their excessive food intake, and can suffer from side effects such as diabetes, high blood pressure, high cholesterol and heart disease.

The Causes of Eating Disorders

The good news is that all eating disorders are treatable, and many former sufferers go on to lead lives that involve more normal relationships with food. However before someone suffering from an eating disorder can get better, they must confront why they eat the way they do. This is most successful when it occurs during part of a counselling or support group session.

All About Eating Organic

Questionnaire: Do I Have a Healthy Lifestyle?