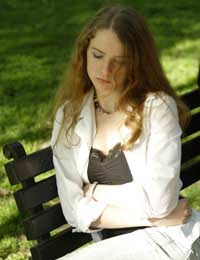 Part and parcel of being a teenager means facing the world in a rapidly changing body, with rapidly changing ideas in your head, rapidly changing friends by your side and rapidly changing ambitions on the horizon. All of these changes can add up to an exhilarating ride when everything works smoothly, but they can also deteriorate into frustration, anxiety and even fear when they do not. To deal with these emotions, some teenagers turn to self harming.

What Is Self Harming?

"Self harming" is an umbrella term for a variety of behaviours that do in fact inflict harm upon oneself. Things like abusing drugs and alcohol, developing an eating disorder, engaging in unprotected sex and putting yourself in an unnecessarily risky situation (such as through drink driving) can all be considered as self harming activities. More often, however, "self harming" is used to describe actions that literally hurt the body, such as cutting or burning the skin or swallowing dangerous foreign objects.

Why Do Some People Self Harm?

Those who self harm often do so because they are better at dealing with physical pain than emotional pain. Often they are unable to cope with overwhelming emotions such as sadness, loneliness, fear, grief or guilt, yet hurting themselves makes them feel better for a short while. For others, self harming is a way of punishing their body for something they are distressed about, for example if they have been abused and are ashamed of this. Self harming can also be a cry for help.

What Kind of Help Is Available for Those Who Self Harm?

The most efficient way to get help for someone who is self harming is to have them see their GP. Scolding someone who self harms, or simply taking away the materials they use to harm themselves, will not address the underlying issues of why they engage in this behaviour. A GP will be able to carry out a physical examination in order to make sure that they have not harmed themselves irreparably, or that they do not have any injuries that must be addressed immediately. A GP will also be able to talk through the emotions that catalyse episodes and the actions used in self harming, and will be able to make appropriate referrals to other specialists.

How Is Self Harming Treated?

Though self harming manifests itself in a physical way, underneath it is really a mental and emotional condition. Only by treating the emotions that cause the self harming episodes can the condition be rectified. Often it is suggested that those who self harm:Self harming may seem shocking to those who have never encountered it, but those who engage in these behaviours often feel that they couldn't live without this coping mechanism. If you or someone you know is engaging in self harm, believe that there are healthier, productive ways of dealing with emotions available. Don't be put off by self harm, but make it clear that it is an unacceptable habit that can not continue - for everyone's sake.

Getting Over an Abortion

ADHD - Attention Deficit Hyperactivity Disorder - How To Diagnose And Treat It
Share Your Story, Join the Discussion or Seek Advice..
uhm, yeah, well... i don't know how to say this.. but i have a big issue, that i wan't to talk about. i've been hurting myself for 5 years, but not in a way you would think. i've been eating paper instead of food.. my friends and family are very worried about me, and i don't how to stop... i love the taste of crispy paper.. :P the best flavor is PINK PAPER! i could eat it all day. please reply, so i can get help..
Emmapar - 27-Nov-17 @ 7:40 AM
@elnie - you really need to see your GP about this so he/she can refer you to a trained counsellor that will help you treat the emotional issues that lead you to harming yourself like this.
TeenIssues - 28-Apr-15 @ 12:43 PM
I used to just bite, scratch and hit myself when I got in trouble or shouted at and now I cut to punish myself for being lazy and getting terrible grades, the thing is I don't cut with a knife or a razor, I use broken glass I find in the forest next to my house.
elnie - 25-Apr-15 @ 4:27 PM
Title:
(never shown)
Firstname:
(never shown)
Surname:
(never shown)
Email:
(never shown)
Nickname:
(shown)
Comment:
Validate: