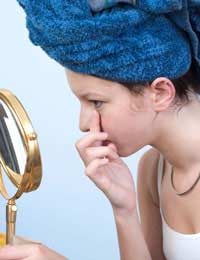 When you hit puberty it can seem like your body is out of control and there's good reason for this: puberty is the time in your life when your body will grow the fastest - except for when you were a baby. Most of the changes your body goes through during puberty are down to hormones. These hormones account for changing body shapes, body hair, acne and menstruation. While it's true that no two people will go through puberty at exactly the same time in exactly the same way, you can trust that everyone does go through puberty and any adult you confide in will have successfully emerged from this confusing stage of development!

The Mechanics of Puberty

Puberty usually begins between the ages of 9 and 13 years in girls, and 10 and 15 years in boys and it all starts when your brain releases a hormone called gonadotropin-releasing hormone, otherwise known as GnRH for short. This hormone causes the pituitary gland to release two more hormones, luteinising hormone (LH) and follicle-stimulating hormone (FSH).

Puberty is usually the last time that your body will grow taller, and it can grow taller in a hurry. "Growth spurts" are quite common in puberty, as is putting on weight. For boys, a broadening of the shoulders, deepening of the voice, growth of the penis and testes and a general development of muscles are all part of puberty. Correspondingly, erections and "wet dreams" may also occur over which boys have no control. For girls, gaining weight in the hips and a growth of the breasts usually leads to a more curvy figure. Some fine stretch marks may occur if there is rapid growth around the hips or breasts.

Boys and girls both experience a growth of body hair during puberty. Hair will grow under the arms and in the pubic region for both boys and girls, as well as on the face and neck in boys. Generally this hair starts out by filling in lightly, becoming more thick and noticeable as puberty continues. During puberty many girls prefer to shave the hair under their arms, as well as the hair on their legs. Both boys and girls need to be aware that this hair, coupled with an increase in sweat and the production of new chemicals in sweat, may lead to strong body odours. The daily use of anti-perspirants and/or deodorants, reapplied after washing, will help combat such odours.

Acne, most commonly in the form of pimples ("spots"), is often triggered by the hormones involved in puberty. Spots may occur on the face, neck, back or chest. Using cleansers or washes designed for acne-prone skin can help reduce acne, though over-washing or washing with harsh cleansers can actually make acne worse. GPs and dermatologists may also be able to prescribe cleansers or medicines to help with severe acne. Some cosmetics are available to help cover up acne, though both boys and girls should try not to use cosmetics too thickly as again it could actually make the acne worse.

Menstruation begins in puberty, usually a year or two after a girl's breasts begin to develop. During menstruation an egg which resides in a girl's ovaries are released, travels through the fallopian tubes and to the uterus. These eggs can be fertilised by sperm. If conception does occur then the fertilised egg may be the start of a girl's pregnancy, but unfertilised eggs are expelled from the body along with the extra lining of the uterus (built up each month in anticipation of a pregnancy) during a girl's menstrual period. Most girls deal with menstrual blood either by wearing pads or tampons (worn inside the body).

A week or two prior to a menstrual period a girl may experience premenstrual syndrome, otherwise known as PMS. Symptoms of PMS may include water retention, feeling bloated, mood swings, anger, sore breasts, clumsiness, lower back pain and/or abdominal pain. Over the counter medicines are available to help with the symptoms of PMS. During certain parts of a menstrual period girls may also experience white discharge which is completely normal, though discharge that has a yellow or green colour, or any discharge that has a bad odour, should be seen by a medical professional.

Puberty is a very confusing time for many people because their bodies change so dramatically and so fast. Height, weight, body shapes, body hair, acne and menstruation are just a few of the changes that occur during puberty.

Having a Healthy Teen Pregnancy